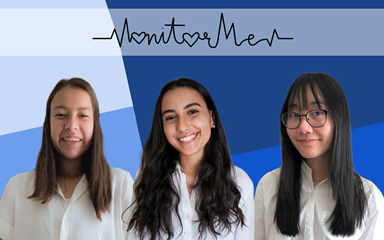 MESA’s National Engineering Design Competition Designing for Equity State Championship was held virtually this May. The contest is a culmination of teamwork and engineering acumen by middle school and high school teams throughout California to create a solution to a real-world problem using a microprocessor.

“We have learned that we can make a difference by eliminating inequities so that certain populations can continue thriving positively without having to worry about something that they are completely unaware of such as bad air quality,” the team said.

That team devised MonitorMe, a portable, low cost health monitor that benefits low-income communities who have less access to doctors due to lack of healthcare and also acts as a personal device such as for those who are hesitant to leave their homes due to COVID-19.

“Through research we conducted, we learned about healthcare disparities facing our world today and how closely linked they are to racial and wealth inequities and lack of accessibility for the visually and hearing impaired,” the team shared in their brief.

The approach of designing for equity allows our students to use their STEM know-how and creativity to make their communities thrive.

“With empathy and a focus on human needs at its core, human-centered design aligns perfectly with MESA’s equity mission,” said MESA Executive Director Thomas Ahn. “Beyond serving as a source of diverse STEM talent for corporations and institutions, we believe it is critical for MESA to prepare our students to lead, to create, and to push boundaries.”

Both teams move on to compete in the nationally against winning teams from seven other MESA states in June.

…And a fun fact: Sophia Catania comes from a MESA family! Her two older sisters, Sarah and Sylvia, were part of a team that placed second at the 2016 NEDC. Sylvia is now working as a biomedical engineer after graduating from UC Irvine in 2021 and Sarah is a current electrical engineering student at UCI. Go MESA!

Shout outs to the runners up: