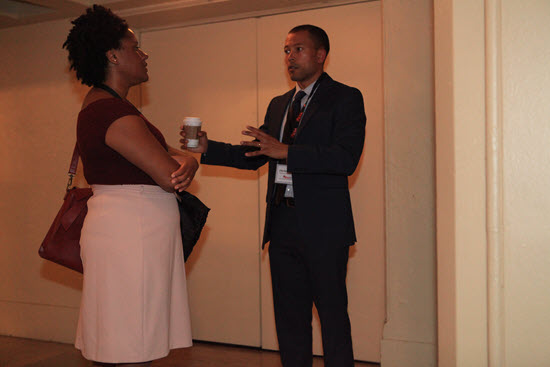 Charles Anderson has his hand raised any time there’s an opportunity to help MESA.

Anderson, the Principal Consultant and CEO of Anderson Pine Corporation, recently shed light on the road to entrepreneurship during a panel at MESA’s Student Leadership Conference in October. He also spent hours doing mock interview with students so they’d be better prepared for future internships and jobs. He’s a member of the MESA Alumni Committee and has a pretty impressive lineup of MESA involvement as a student. Here’s what Charles has to say about his MESA experience:

When and where were you in MESA?

“I was in MESA at Verdese R. Carter Middle School in Oakland and Oakland Technical High School (I was vice president and president of MESA club) and I also attended UC Berkeley on weekends during that time. While an undergraduate at UCLA I was a project facilitator and tutor at University High School in LA.”

What was your favorite MESA moment?

“I remember I was building a balsawood bridge for several weeks and having it hold only 75 lbs – compared to the hundreds of pounds that others held. It was a good lesson in failure and to not give up. Those lessons helped me take the risk of starting my own business.”

Why you are a MESA alumni committee member?

“I believe that MESA is stronger with an engaged and supportive alumni. I have a moral responsibility to give back because of the impact MESA had on my life,”he said.

Take a lead from Charles. Get involved with MESA today!